Yayyyy! This was my first reaction when I received an invitation for food tasting at Toss Sports Lounge. I met few amazing people who also came up on invitation. It was Wednesday night, a weekday, so not much of a rush in the restaurant. When I heard Sports Lounge, I was amazed as there are very few such concept/ theme based lounges in Pune. Toss Sports Lounge includes Zaheer Khan's involvement and to open this is an obvious step. 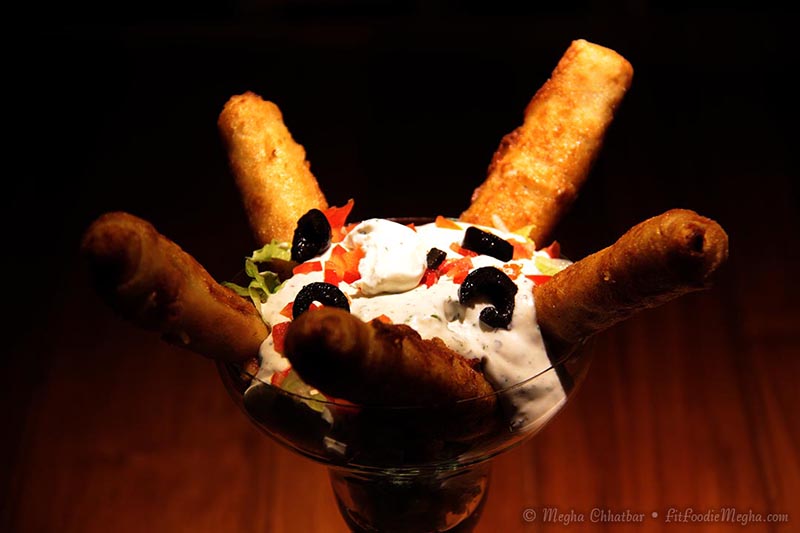 Food:: They have comprehensive bar and food menu which includes, Mediterranean, Lebanese, Italian food with cocktails and mocktails. Since its a Sports lounge the menu primarily focus on the finger food that can go while you watch matches on the big screen fitted right at the entrance. Since, the dinner was on invitation, the menu was pre-fixed which included signature dishes by chef (sorry, forgot to take chef's name).We were asked about our preference in food, which was vegetarian, so Chef assured to make them equally perfect.The courteous staff asked about our preference in drinks. They shared their best knowledge.

I opted for Virgin Mojito which was a great choice. It had lemon slices, soda, mint leaves made to perfection. I also tasted Sinful Passion which was equally good with Passion fruit syrup mixed with orange juice. 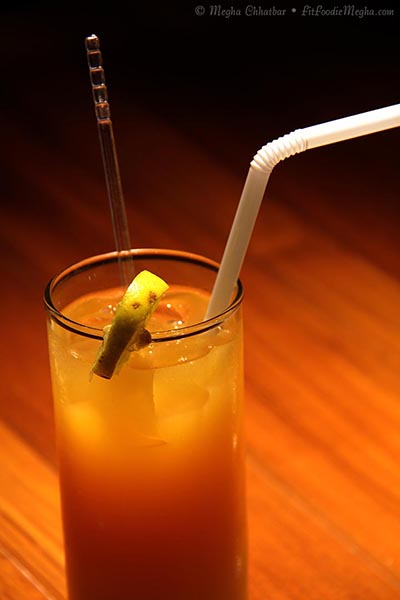 First appetizer was Italian Bruschettas made with ciabatta bread . It consisted of grilled bread portions topped with tomatoes, basil, olives, cottage cheese and corn. It was crisp and yummy. 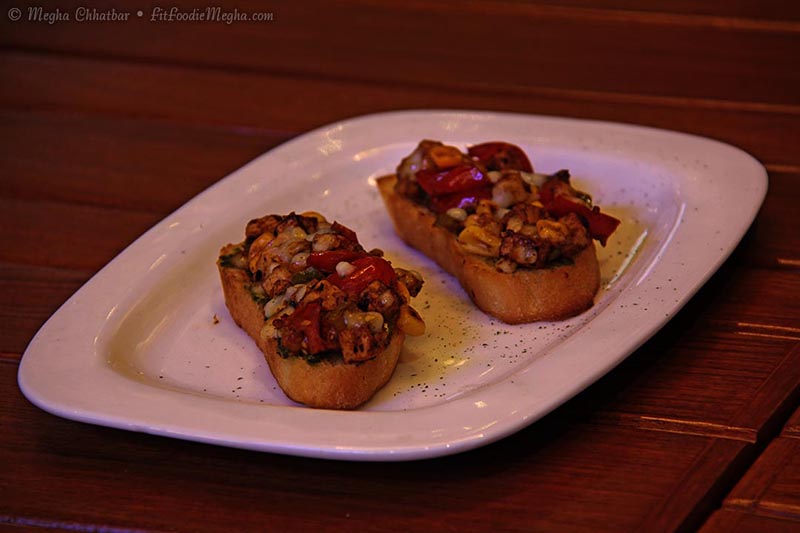 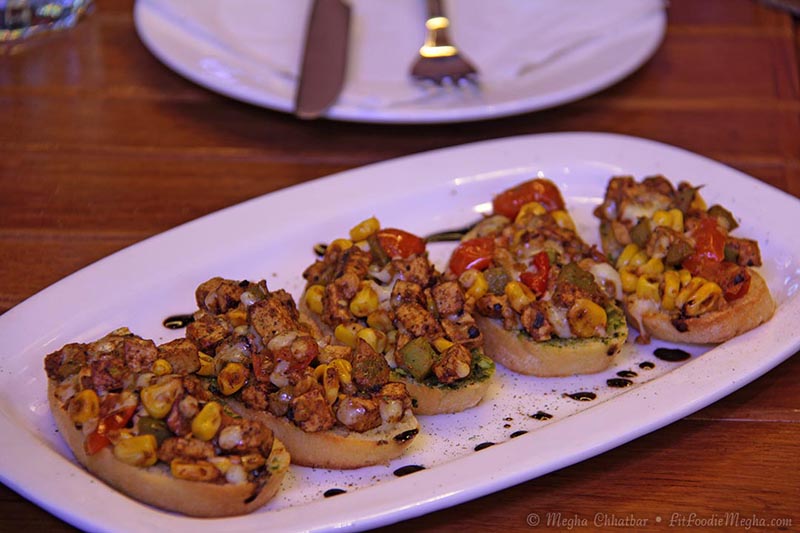 Then was Cigar rolls, OMG, what can I say, never ever had soo yummy golden fried rolls. It had stuffing of their secret mixture, cottage cheese and leeks. They were served in a very interesting way in a glass with bit of veggies, topped with sour cream, mayonnaise and olives. The taste was heavenly. 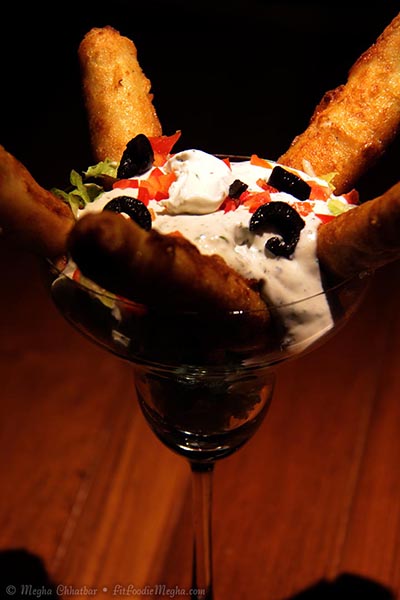 To accompany cigar rolls, Toss Lounge's signature five dips were presented. They were Parma, Chilli mustard, Cheese Chipotal, Wine gravy, creme de chive lemon. One tasted better than the other. My favourite was cheese Chipotal. I would recommend all to try this atleast once. 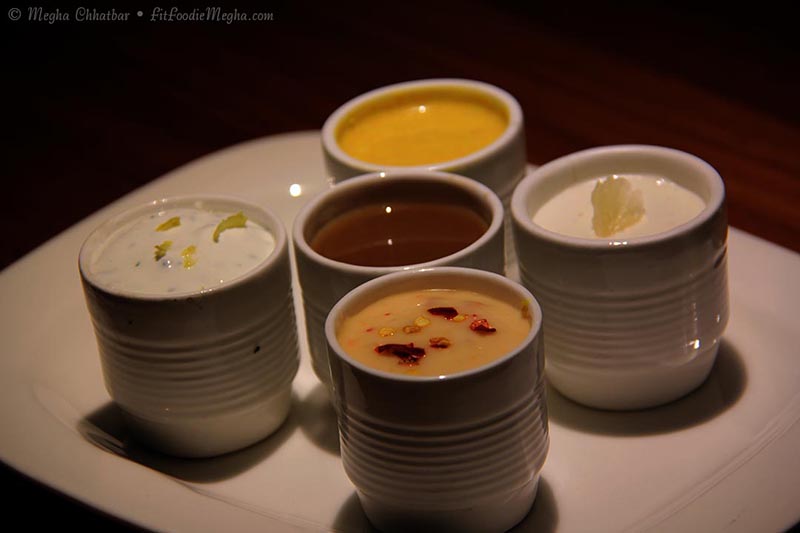 Then we had Mediterranean Mezze platter. Basically, Mezze is a selection of small dishes served to accompany alcoholic drinks as a course or as appetizers before the main dish. Served with Pita bread, flat bread and had hummus, baba ghanoush, tabbouleh and tzatziki. Pita bread were soft and tasted best with baba ghanoush. Overall, a nice platter. 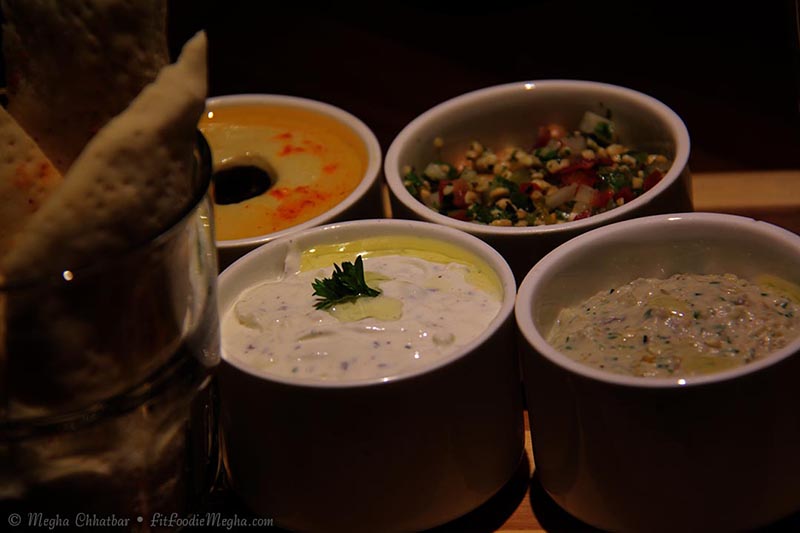 After the platter, came in Caesar Salad which was also a vegetarian preparation. Made with Lettuce, garlic croutons, parmesan cheese, and special caesar salad dressing which tasted heavenly. The salad was soothing. 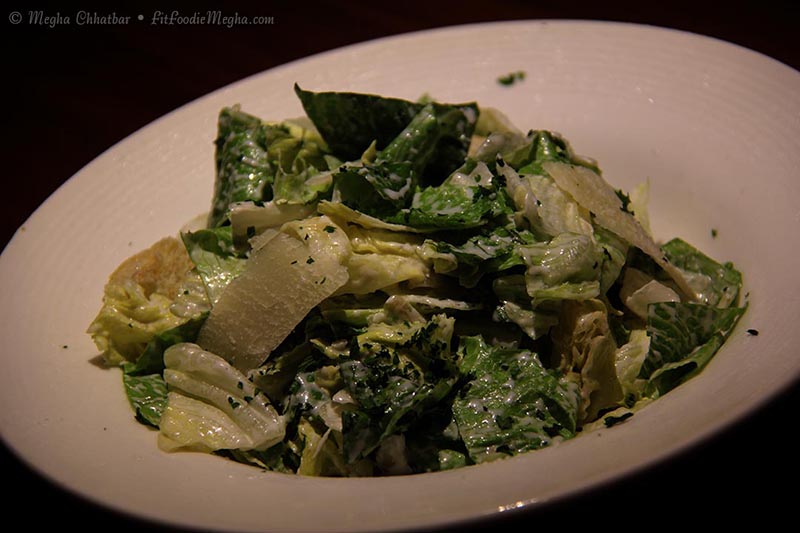 Done with the wonderful, delicious appetizers, we were served main course. It had 2 types of Vegetarian Pizzas, Grilled Chicken Sandwich, Risotto, Spagetthi with meatballs, Pesto Pasta. 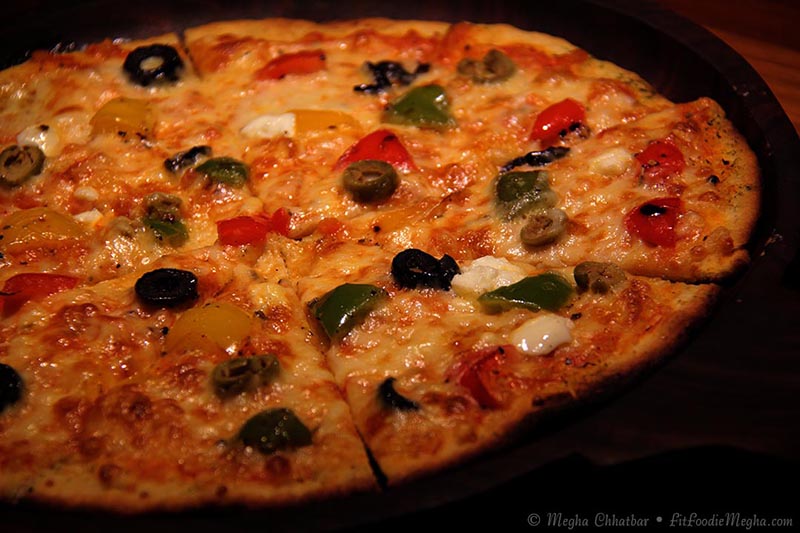 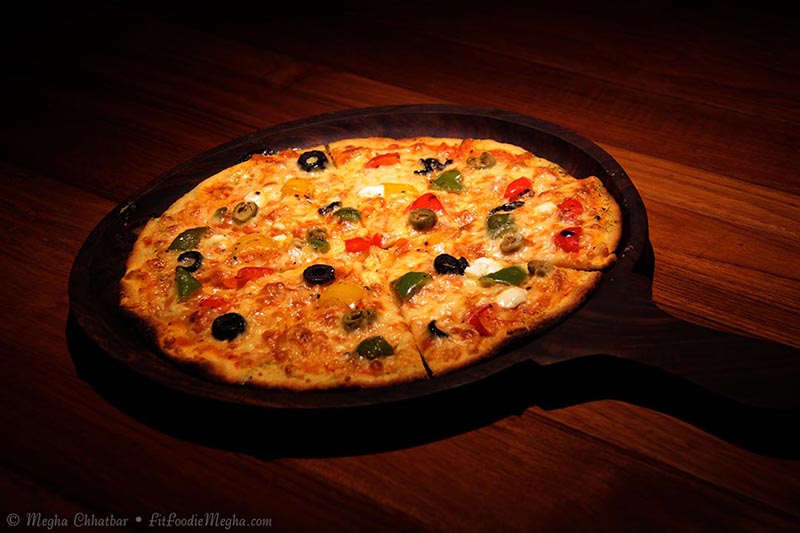 Second pizza was Vegetarian Gourmet A La Toss which was also thin crust topped with fresh garlic, red onions, Zucchini slices, red pepper, Jalapeno and Mozzarella cheese. I personally don't like zucchini that much so this pizza did not tempted me. 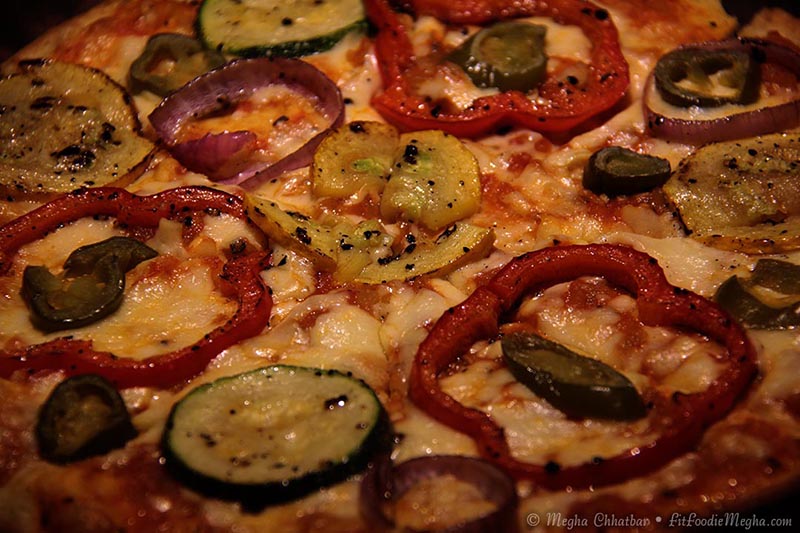 I tasted Veg La Fungi Risotto for the first time and woah what a taste! Flavoured Arborio Rice, with tri colored bell pepper, cooked in vegetable stock and Pinot Noir white wine prepared very finessely . I would highly recommend this dish for every foodie who loves Italian cuisine. 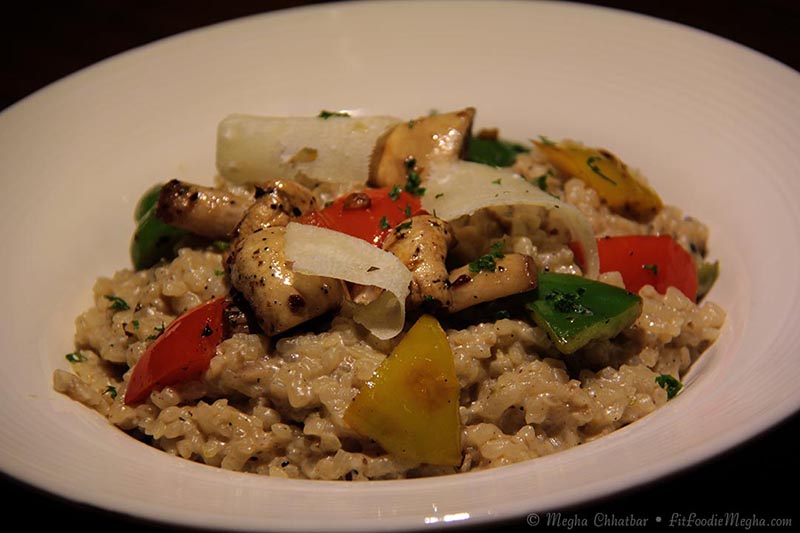 Other fine delicacy was on its way and that was Pasta Penne Pesto. It was green colored Pasta deliciously prepared with pesto sauce which had perfect balance of basil in it. 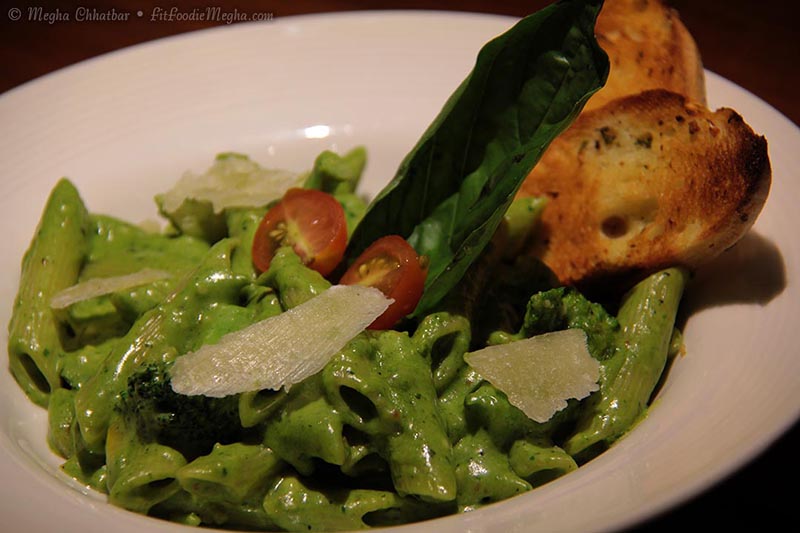 I can't comment on the taste of Grilled Chicken Sandwich and Bolognese Bliss Spaghetti as they both were non veg preparation. But yes, I did tried french fries served with sandwich. They were really crisp and fried at a perfect temperature. They looked amazing though. 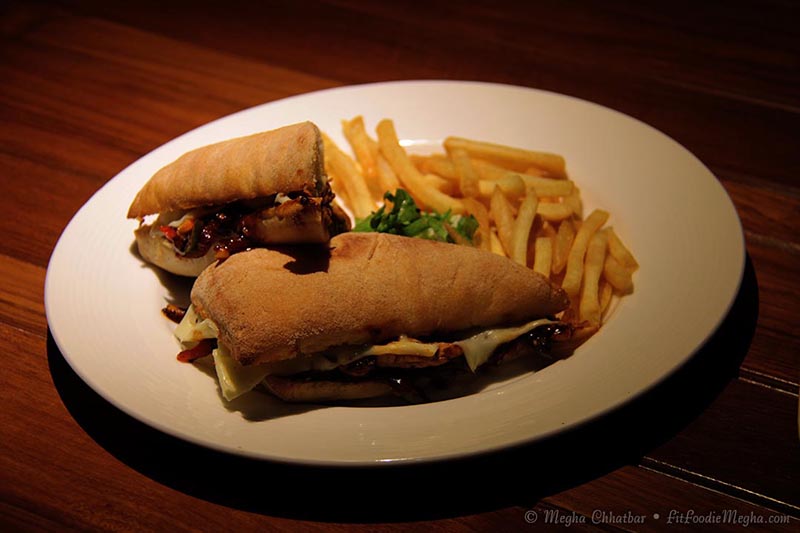 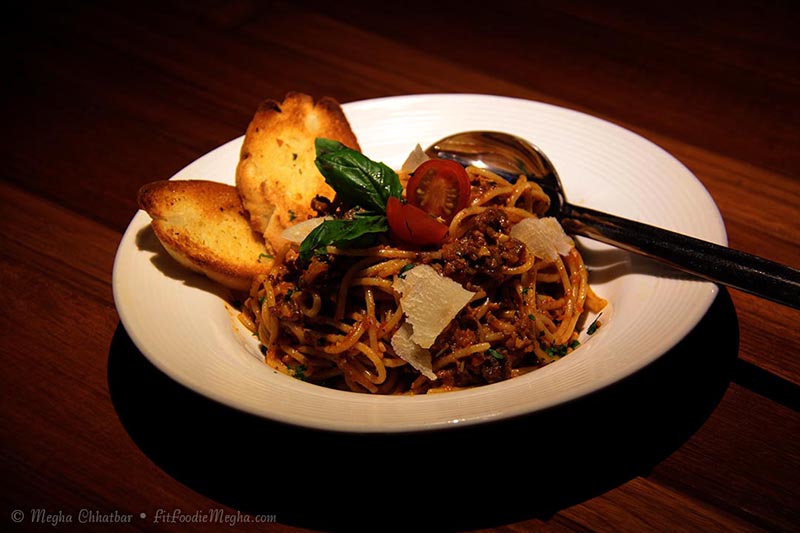 Last but not the least was the dessert. What I can is the cherry on the cake...Tiramisu!...Basically an Italian Coffee flavoured Dessert which means "lift up". Yes, it definitely lifted our taste up. Served in a cup and sprinkled with coco powder was making it look more tempting. When you take first scoop of it, the flavour of coffee spreads slowly in your mouth and that's the feeling of having dessert. You have to really dig in till the end to have the complete flavour of it. At the end is a biscuit which goes well with the cake. Frankly, for me, it should have more of cake layers rather than whipped cream which could have increased its taste many times more. 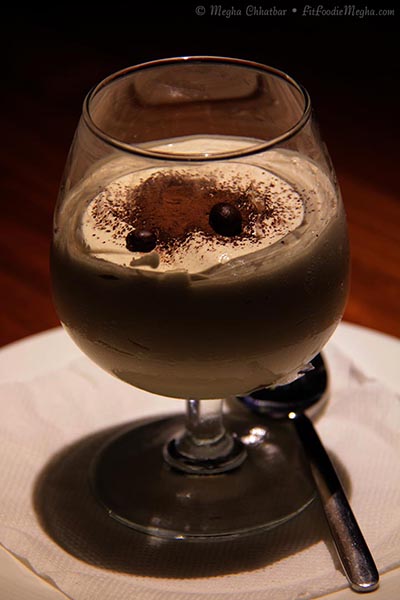 Ambience:: No one can deny that truly delicious food is the cornerstone of a great restaurant; but you’ll often recognize the crucial role that ambience plays. This Lounge did not disappoint me here also. It had complete sports look. At the entrance you can't miss the big screen and a big cricket ball right overhead. 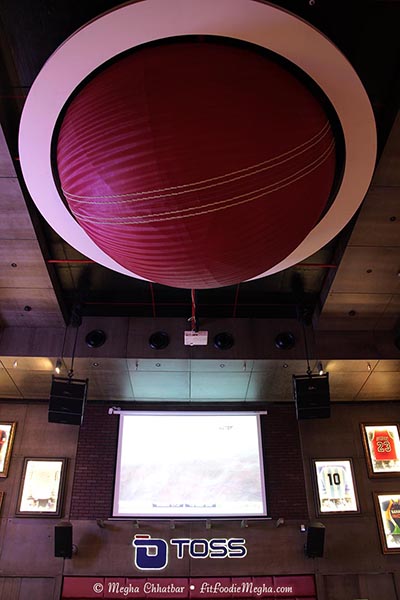 What I liked most was the use of stumps for the support of the seats. Very creatively designed. Everywhere it had the taste of different sports right from cricket to badminton to baseball, football. Walls were decorated with the memoirs of ZK. His photographs and signed bats were making it look more beautiful. 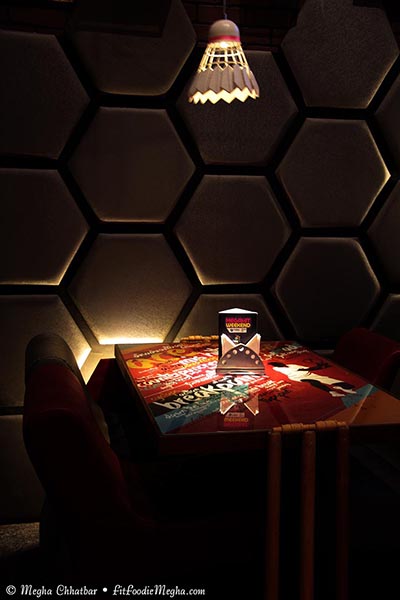 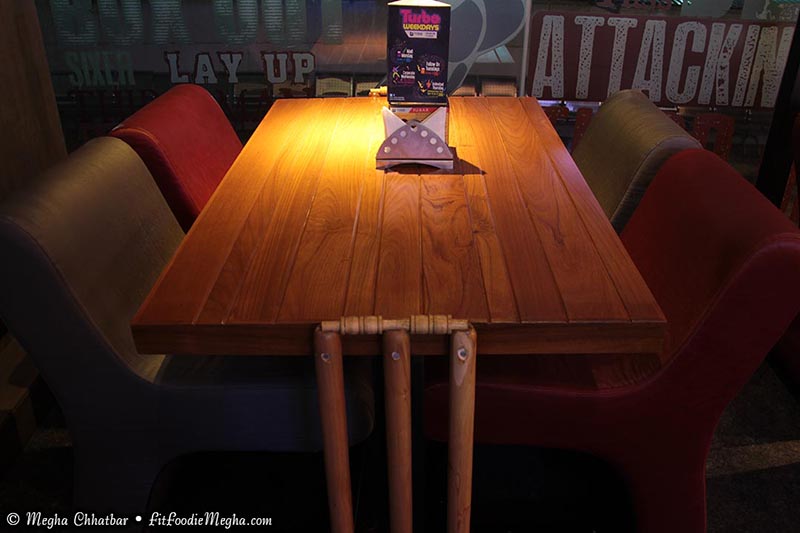 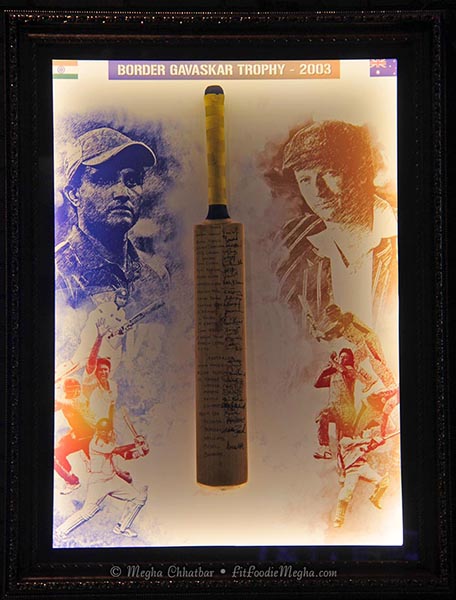 On the right side of the entrance is a little bar area and to the left is the video game section. Near it is the stack of auto biographies of big personalities including Sachin Tendulkar. They have not missed any corner of it to give a sports theme look. Outdoor seating was also well managed though we didn't try it. 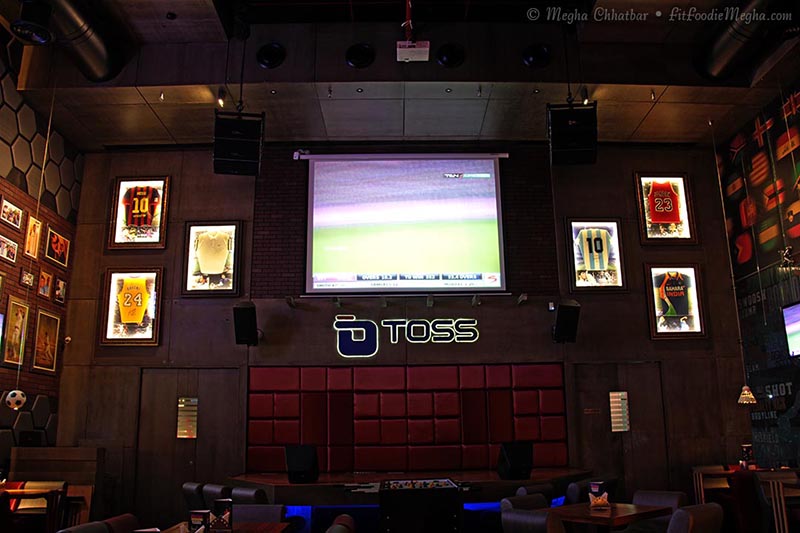 Service:: Well educated, courteous staff. They were very helpful and quick. Overall, a must visit for not only those who like sports but also who love great food!

Special thanks to Minoti, Shivangi and Carina for arranging the meetup, inviting me and allowing me to meet fellow bloggers. Had a great evening!