Savya Rasa meaning Flavours of the South, is located in the prime location of Koregaon Park. The Owners want to break the mindset of people about South Indian food and introduce the local forgotten and unexplored flavours of South India. This is not merely a restaurant, but also a dream ancestral home where memories are relived. Every element has its story, its history- be it the red and white wall at the entrance, or the pillars, the doors, the treasure box with Burmese design, to the small wooden game, each and every nook and corner is well planned and has finesse. Ambience::
What attracts you the most is the Andhra Pradesh's Tholu Bommalata (traditional leather puppets) pasted on the glass depicting Ramayana, and also the hand-painted intricate Kalamkari art, made using vegetable colors. 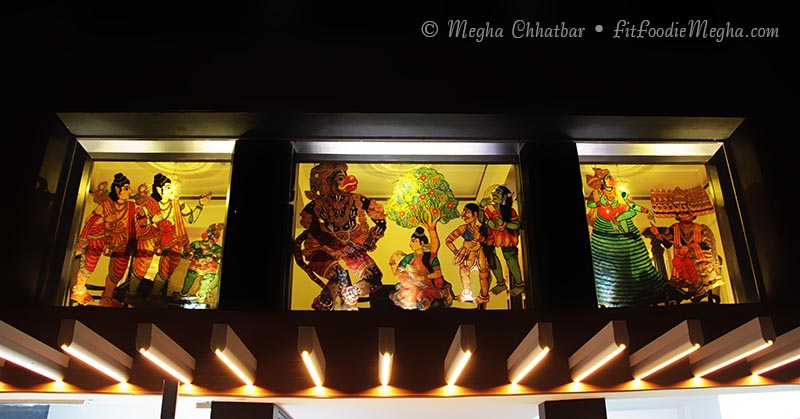 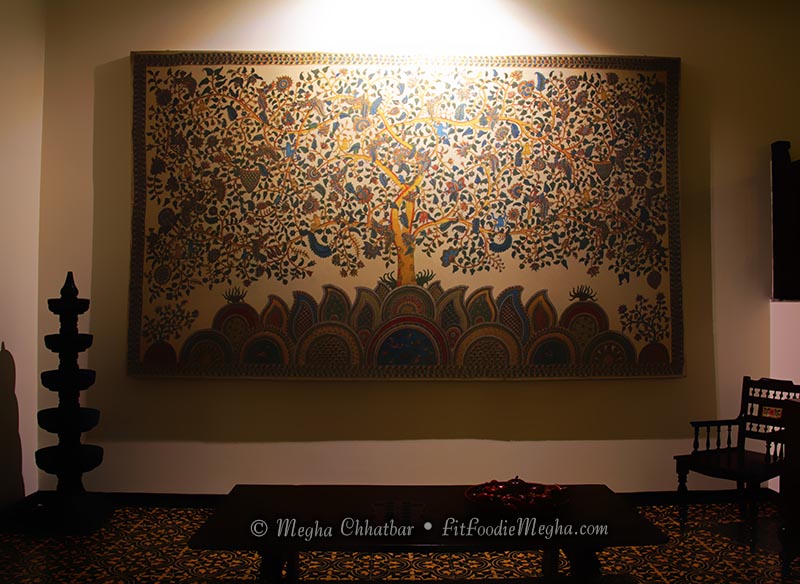 Food::
Being an invitation, menu was pre decided with balance of drinks and Veg and Non Veg servings. 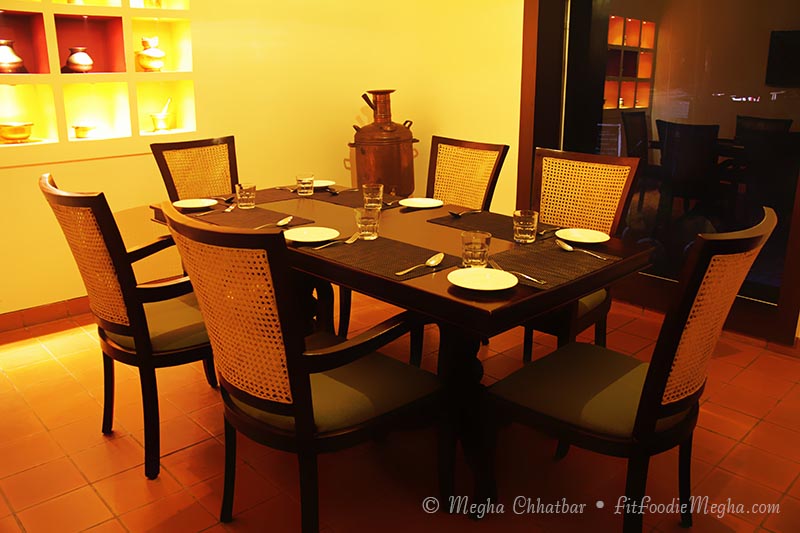 We were asked for the type of flavoured water and the best choice was Khas after which we were offered Spiced butter milk also known as Sambaram, a traditional refreshner drink of Kerala. Definitely refreshing with perfect blend of cumin seeds, chillies, ginger, and coriander! 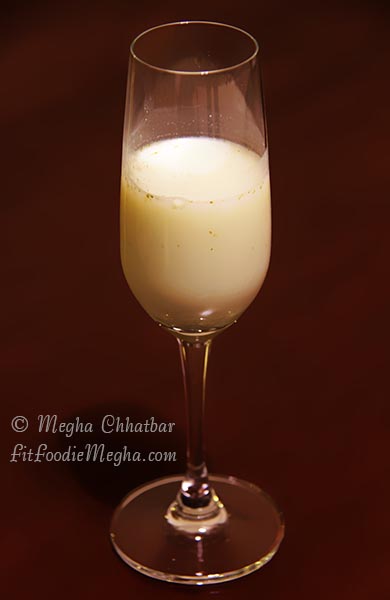 Cocktails and mocktails made their way, from which I chose Kulukki Sharbat, a mocktail. Again, a refreshing concoction of Pineapple, Strawberry Syrup, Basil Seeds, with a dash of nannari syrup. 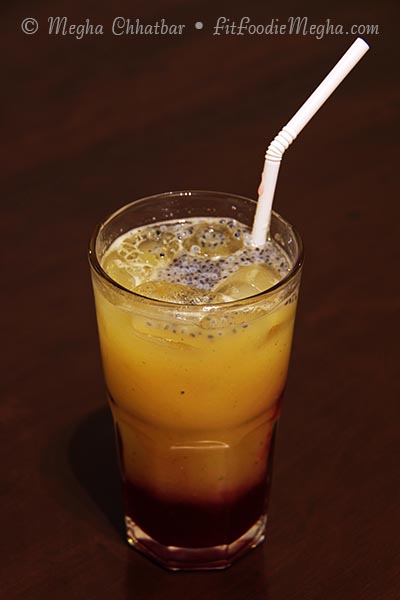 Munchies included Arisi Vadagam, a traditional rice preparation from Tamil Nadu. It was crunchy and went well with the drinks. 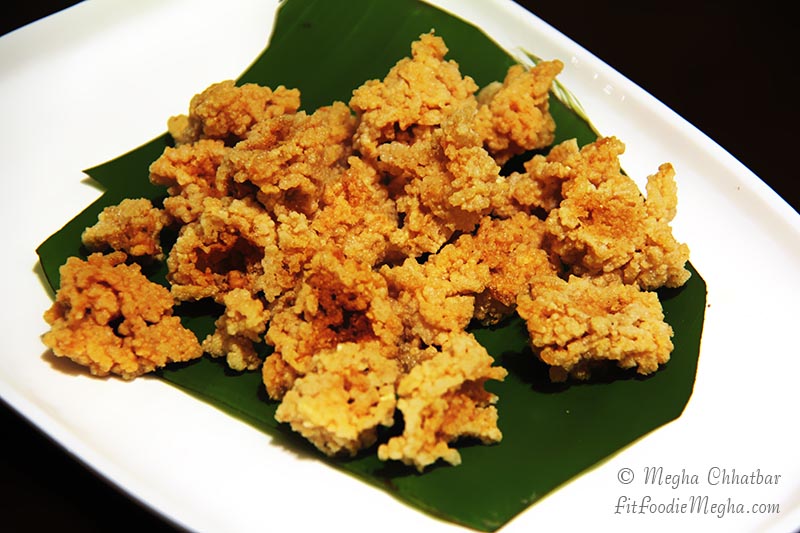 Veg starters had Cheniga Pappu Vada, Biskuthambade and Koon Ularthiyathu which were made with lentils and mushrooms respectively! 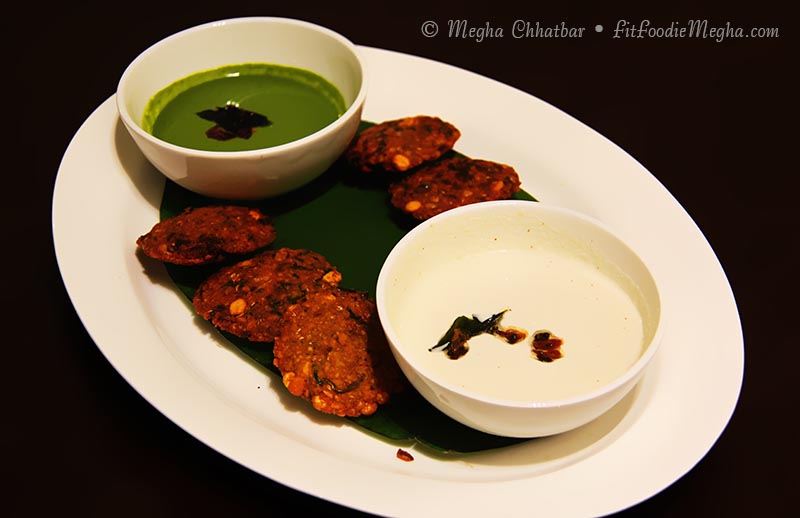 Cheniga Pappu Vada or Senagapappu Vadalu comes from Nellore and prepared by lentils (chana dal), onions, garlic and served with coriander and coconut chutney. We could not took our hands off this crunchy dish. 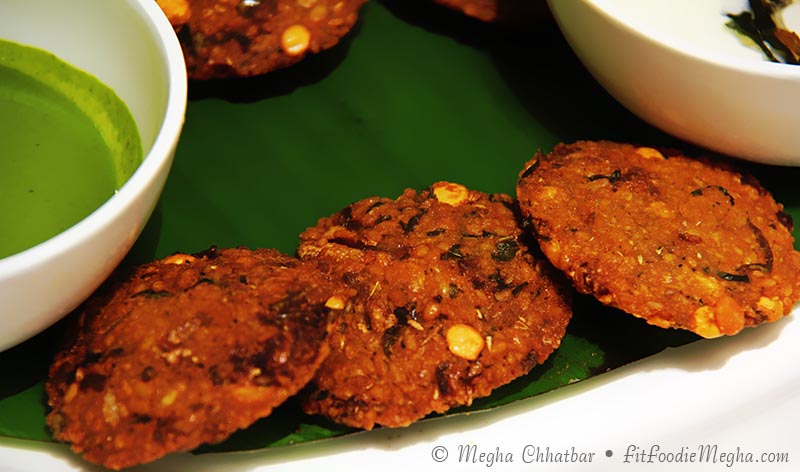 Koon Ularthiyathu is a spicy stir fry mushroom dish. I am not a huge fan of mushrooms, but still found it had all the flavours. Mushroom lovers can go for it! 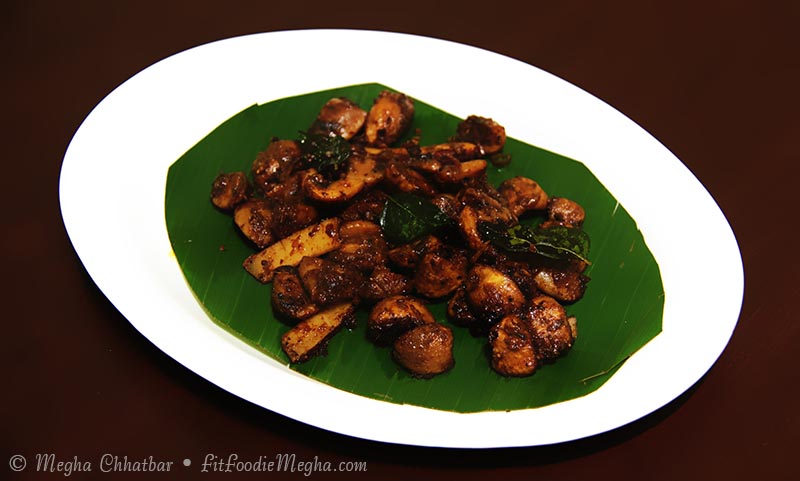 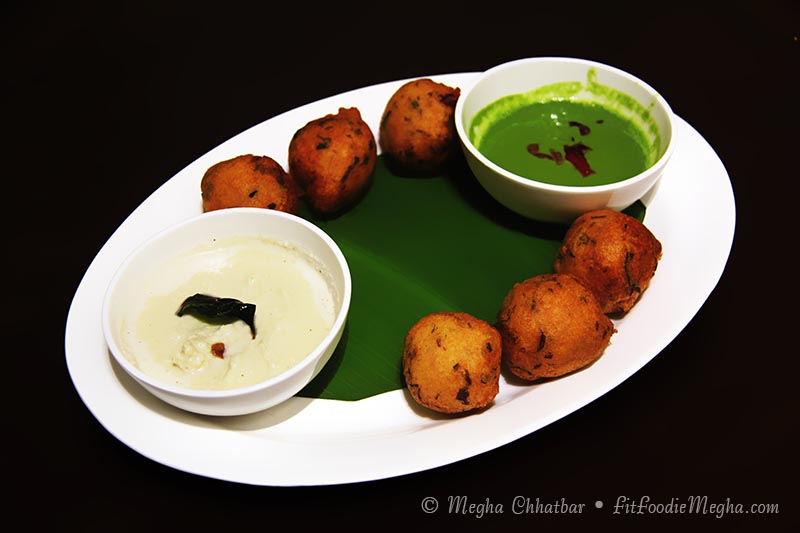 After highly satisfied and fulfilling appetizers, main course too had variety of Vegetarians like me. Bun Parota/Kambu Rotti, Gutti Venkaya Masala, Idiyappa Idly, Saiva Eral Kuzhambu to name a few were served to us. 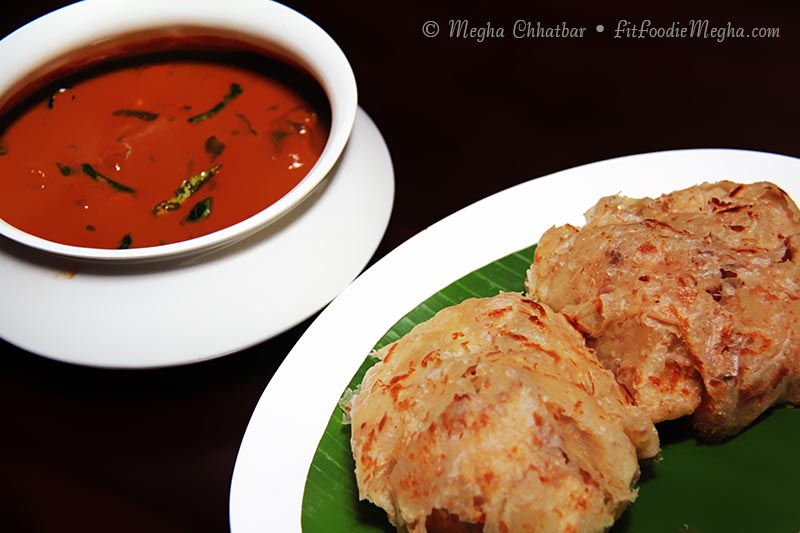 Bun Parotta, so called because of its flaky texture and shape, made with refined flour and eggs. It was so delectable that you could it like that only! Gutti Venkaya Masala or Stuffed eggplant curry was to accompany Bun Parotta. Gutti Vankaya was prepared with peanuts, coconut, red chilis and mild spices. Eggplant had taken all the flavours of the spices. Nicely cooked. 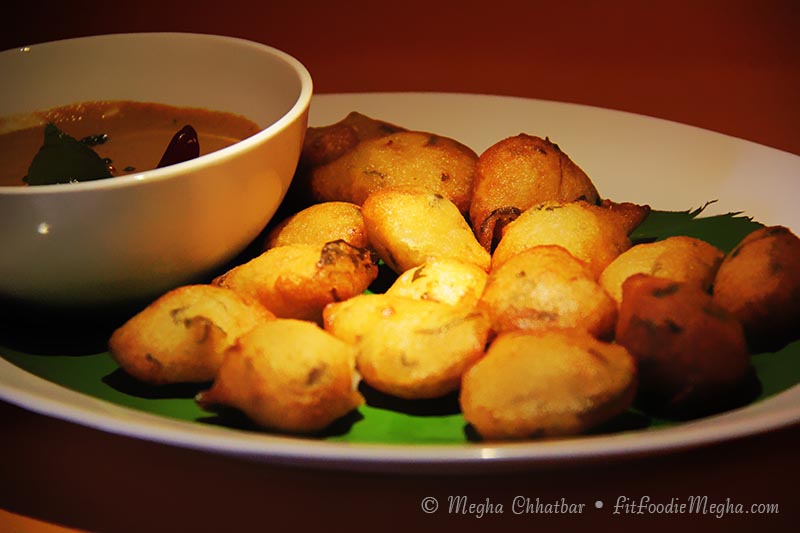 Idiyappam Idly can be called as White string hooper because of its shape. It is a very authentic and easy recipe served with spicy gravy. 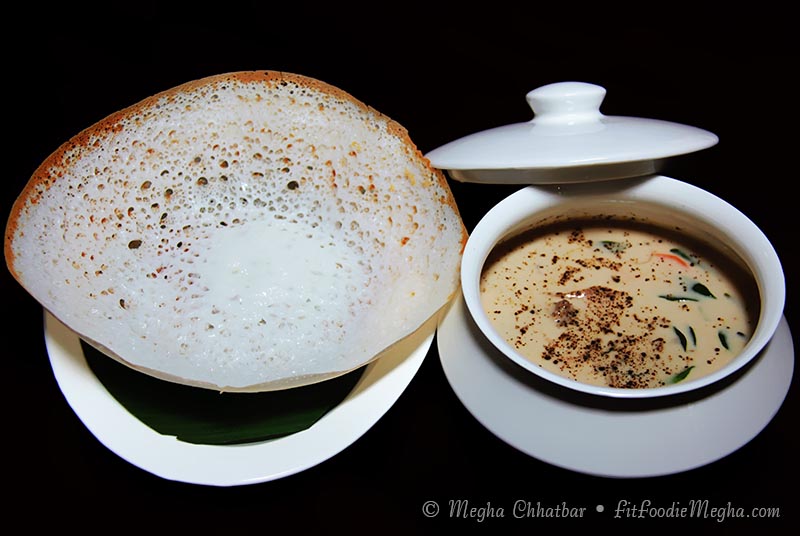 Saiva Eral Kuzhambu was quite an unsual mock meat preparation. For all those vegetarians, who want to eat non-veg and might crave for it, this dish is for you. Ground whole green gram is used here to make the liver with tomato and tamarind to give it a sweet and tangy taste. Good attempt.
Non Veg main course included Milagu Kozhi Chettinad, Pollachi Kari Kozhambhu, Batata Pathanja Gassi, Chepala Pulusu, Thalaserry Meen Biriyani and Malli Sadam.

Dessert had Obbatlu and Karuppati Halwa. Chef needs to work on th sweets. After all those tempting and delicious dishes, desserts were a bit disappointing! Obbatlu or Bobbatlu, Boli, Holige, Obbattu in Kannada, a traditional Andhra dish, alike Puran Poli in Maharashtra is a sweet flat bread. I found it a bit dry, however taste was good. 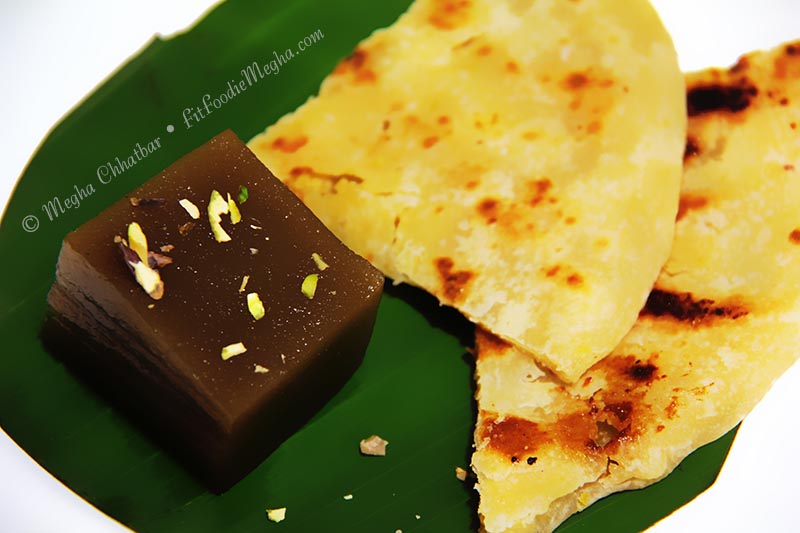 Karupatti Halwa or Kerala Special Black Halwa is made with rice flour. It was drenched in ghee and not for calorie counting people. May be we are not used to having so much ghee, is the reason, people did not opt for it much.

Sulaimani Chai is a popular black tea in Malabar in which cardamom, ginger and lemon are the key ingredients. It was highly appetizing and much needed after we were stuffed with the lip smacking food! 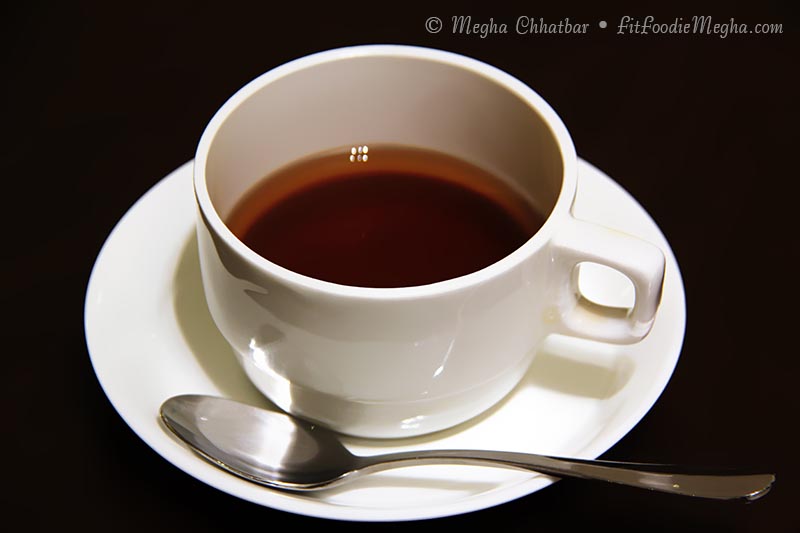 Service:
Nothing to say about, flawless service and dedication! Whole staff was wearing the traditional attire of South India, a mundu or dhoti and white shirt.They give you so much affection alike you are at home.
Recommendations::
Arisi Vadagam
Cheniga Pappu Vada
Bun Parotta
Gutti Venkaya Masala 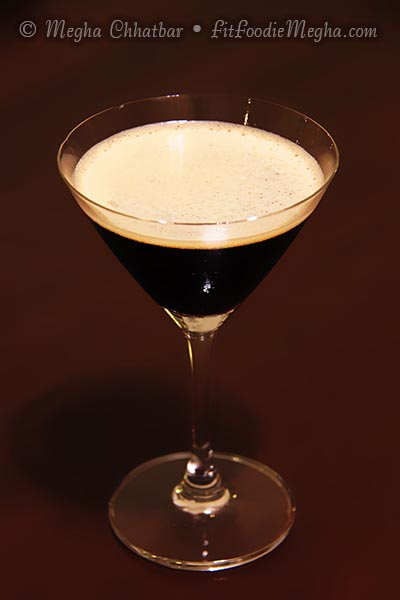 They offer cocktails with a southern twist along with spirits, beer and wine every Friday & Saturday only.However, they are expected to commence full operations and have the bar running everyday as soon as possible. 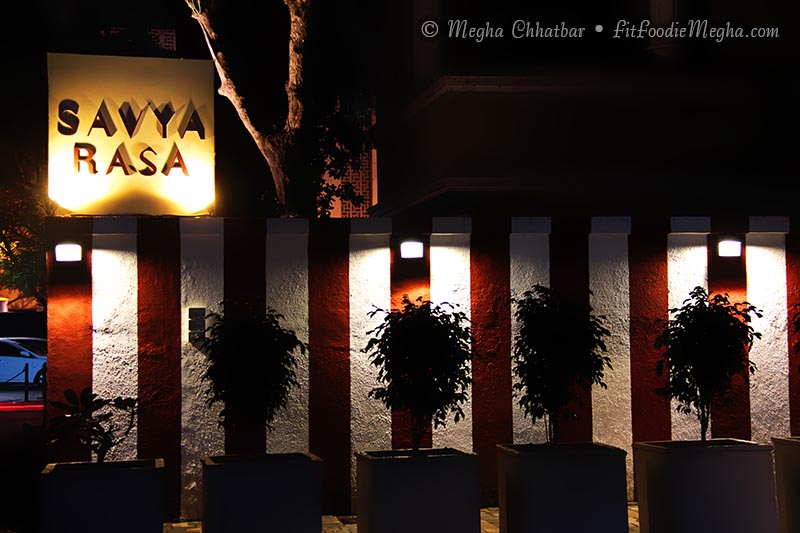 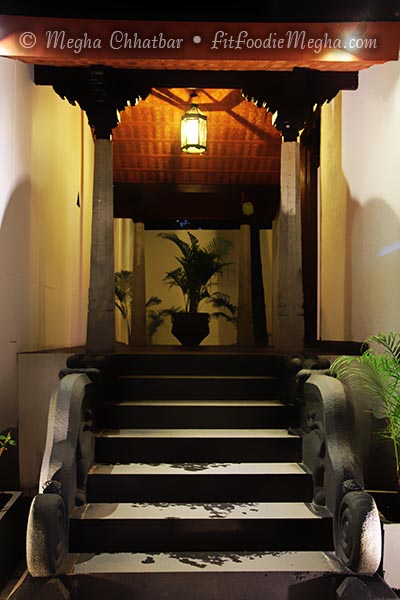